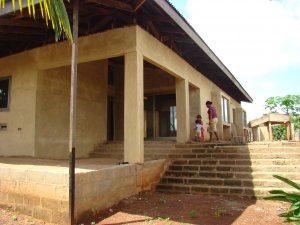 this experimental house is still under construction

Based on the traditional Ghanaian compound house, this dwelling is centered around the compound, that gives access to all rooms of the house. Thus the space needed for circulation forms an area making the house look much bigger than it is. The site has has a tremendous view on the Amasaman hills. However, because the plans for the neighbouring plots are not yet decided, it was too risky to design the house based only on this view. Therefore the house has an introvert character - focussed mainly on the courtyard and on the backyard - but with occassional glimpses to the hills.
Though the traditional houses are covered by a gable roof, in this house a mono-pitched roof enables warm air to leave the rooms in the highest points. Outside air, cooled by the shade of trees, is replacing the warm air through inlets at the bottom of the wall. Thus a sort of cross ventilation is enabled without having to open the windows, thus preventing dusty air to enter the rooms. By seperating the roof from the ceiling and leaving the space in between open, there is no space for solar heat to accumulate. 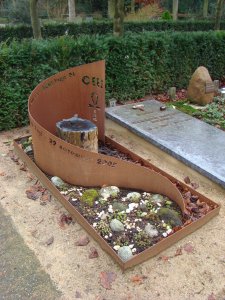 During his life the deceased had a passion for (salvation of) trees, and his widow came across a fossilized tree stump. It was quickly decided this had to be the centerpoint of the grave. Since the deceased also used to be a steel constructor, it was decided to combine these elements. Important was the wish for making the grave like a little garden, another passion of the deceased.
The corner position was a leading factor in the design of the steel object and the positioning of the text. Instead of normal 'cold looking' steel we have used so-called 'weathering steel'.
Click here for more pictures.